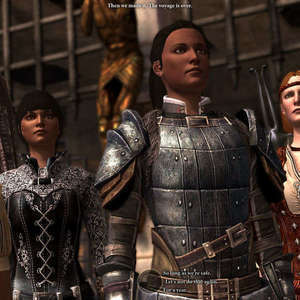 So we’re doing things a little differently this time around, David gets the night off as we have a ladies night to spill all our Hawke feels on the table, the floor, everywhere. Tanya is joined by Sylvia Monreal and LC Brown to have a night of Hawke FEELS! This happened because of a question LC asked of Sylvia before she joined us for the first time on Fresh Out of Tokens.

Also! We had our first fanmail relevant to both Dragon Age and Sylvia's time with us, so we added that into the show :) Full text is below:

> Subject: ALL THE DRAGON AGE FEELZ!

Hello! I just wanted to say that I really loved your discussion on Dragon Age and the Hawke Immigration piece! I was really pleased that other people put as much personal stuff onto their Hawkes/Inquisitors as I do. I’ve had issues with masculinity in general and as a queer man, something that playing Mass Effect and Dragon Age have helped me with. I just wanted to say that I really loved this episode and I think that Fresh Out of Tokens is really fantastic and you all are doing great work and through this podcast I’ve been introduced to great people in the industry. (Also, if you do ever get the urge to do a Dragon Age feels podcast, I would be glad to lend my voice!)

Thank you so much for everything you guys are doing! From Tyler Pollock, cyberpunkwarlok on Twitter

Points of discussion for this episode:

•LC: DA2 as a story of grief, mothers in Dragon Age, female friendships (which ones work, which ones don’t) - just some ideas

•Sylvia: Controlling versus being Hawke - how does playing Hawke differ from nameless heroes like the Warden or the Inquisitor? Was your Hawke their own person or an avatar, and how did that affect the game for you? Who is your Hawke’s best friend? DA2 as an immigrant story - Sylvia on FemHype

•Tanya: Fenris and Tevinter, the way in which his trauma as a former is ignored, and the way in which the fandom seems to ignore/coddle/fails to acknowledge lyrium addiction, by Templars, and also vilifies Anders w/o accepting the abuse he faced in the Circle.

Where to find our guests online:

LC at: The Heroine’s Journey, www.hjcast.com

Where to find Tanya Online: