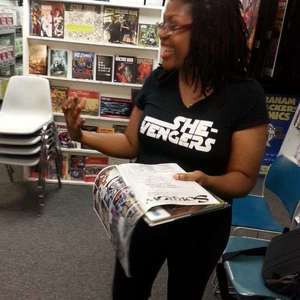 We chatted with Mikki Kendall about her debut comic, #SwordsOfSorrow, breaking into the industry, speaking at AlterConf Chicago, diversity in conventions and more.

We’re part of the Geeked.fm network along with Geeks in Sneaks, Chromatic Life and More than Bits. We have tees, and other items in the #INeedDiverseGames spreadshirt shop. We’re splitting the profits 50/50 with Chachibobinks. Thanks to Shareef Jackson for posting a pic with his mug!

We’ve got a blog to compliment the show! Follow us at outoftokenscast.wordpress.com If you have questions, compliments, hate mail feel free to drop a note there as well.

Mafia III trailer released, has black man who is a vet, set in NOLA in 1968

Swords of Sorrow #18 is out as of September 2nd!