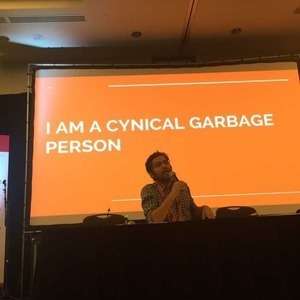 We chatted with Anthony Burch about his #GX3 talk, diversity in AAA spaces, dug deep into some Borderlands lore for listener questions, and he convinced Tanya to re-up her Hulu sub for RocketJump.

We’re part of the Geeked.fm network along with Geeks in Sneaks, Chromatic Life and More than Bits. We have tees, and other items in the #INeedDiverseGames spreadshirt shop. We’re splitting the profits 50/50 with Chachibobinks. We’ve got a blog to compliment the show! Follow us at outoftokenscast.wordpress.com If you have questions, compliments, hate mail feel free to drop a note there as well.

•What is the one game you think everyone should experience, and why?

•Was Borderlands 2 made for Bronies, and am I an honorary Brony because I enjoyed it? (maybe explain context of that being a thing during your GX3 panel?)

•Handsome Jack is a polarizing figure in that so many people felt empathy for him, even going so far as to defend his actions. What was the thought process in creating such a nuanced villain that plays the gamer as much as the Vault Hunters?

•I have heard conflicting things about Axton. I know that because of the reviving glitch that made him hit on male as well as female teammates he was then made bi in canon. But I have also heard that he was initially supposed to be written as gay, but gearbox decided not to. My question is: which came first?

•Tell us more about Ellie; how involved were you with her story, and how do you feel about the message of her character and story, particularly the Positive Body Image quest? What was the inspiration? Obviously it's super unusual to have an obese character in a game other than to be the butt of stupid jokes, so it would be interesting to hear more about how Ellie came about.