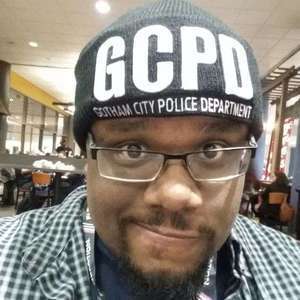 Matt Peters joined us to explain the GCPD in his twitter handle and podcast title, talk up comics and SFF and just a bit about PAC Man!

We have tees, and other items in the #INeedDiverseGames spreadshirt shop. We’re splitting the profits 50/50 with @Chachibobinks. There’s a blog to compliment the show! Follow us at outoftokenscast.com If you have questions, compliments, episode or guest feedback, feel free to drop a note there as well. You can also @ us on twitter; @OutOfTokensCast or email us freshoutoftokens@gmail.com.

What is your favorite comic/manga based on a game?

What's the one comic you'd suggest to someone to show them why comics are awesome?

What's a comic you wish you could rewrite (for any reason)?

What SF/F story or novel does he think would make a great video game?

If he was a WWE wrestler, what would his character's name & personality be?

What is the most RIDICULOUS snack you've had for Resnackulous Tuesdays? Inquiring minds NEED to know

Where to find our guests online